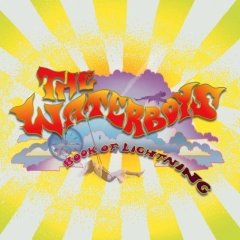 The Waterboys – Book Of Lightning

Perhaps a review I had written comparing an album to The Waterboys was seen as a preference by someone at Glasswerk, as low and behold, the new album by none other than The Waterboys drops through my letterbox.

And perhaps my perception of them and a dated sound based on ‘whole of the moon’ was a little hasty, as Book Of Lightning stands up quite easily against current indie offerings, with its share of mini anthems and toe tappers, the guitars strum and squeal and ring out as they should, the drums pound and beat out a strong backbone for the entire album and the vocals shine throughout it all, the knowledge that this isn’t a young upstart band serves to add a depth in the voice without it sounding tired.

During the albums softer moments it also holds its own, with its atmospheric percussion and occasional lilts towards country and songs where the poetry of the lyrics really stand out as if independent of the music.

The poetry of the lyrics independence is also its only downfall, with some couplets sounding so ridiculous and forced that you wish lightning had struck their rhyming dictionary to have spared you the winsome horror of listening to it. A minor gripe for an album that has definitely proved me wrong and put my lazy journalism to shame.