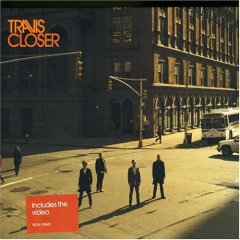 Given that most people seem to believe that Travis are dead, this release may come as a surprise to some, and as a blast from the past for all. The last time we heard from Travis, the glory days of ‘Driftwood’ had given way to what can only be described as kack Dad Rock, and perhaps acknowledging that those who loved first album ‘Good Feeling’ in ’97 will have now grown into Proper Adults, the band have refused to stray from this vein.

They may have become synonymous with chilled out indie-pop, paving the way for such disgustingly wank bands as Keane, but it’s undeniable that they do the genre well. ‘Closer’, the first taster from forthcoming album ‘The Boy With No Name’, won’t disappoint their fans, being a relaxed, easy-guitar-driven lament about, I assume, needing to be more intimate with someone. It’s difficult to consider the lyrics and what they might mean, as you immediately enter a state of gentle swaying and mental vagueness as soon as the song starts, but apart from that, it’s pleasant enough. It’ll sail through the average young music fan’s life without making much impact or offence, and like dogs with high pitched whistles, only the slightly older demographic will perk their ears up and listen.

A predictable step forward (or maybe only sideways) from their last recordings, this single isn’t enough of a departure to enrage their fans or create new interest. It’s Travis. That’s about all I need to say.