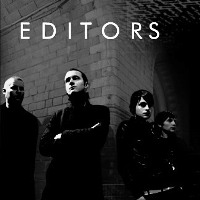 Editors – Smoking Outside the Hospital Doors

They say change is a good thing – whoever ‘they’ are can take a flying leap.

Editors are back and they haven’t changed a thing – they’re back with more of their distinctive, Joy Division-inspired anthems that made The Back Room such a massive tour de force.

The band is on top form – eloquent, articulate and moving.

The first offering off their upcoming album ‘An End has a Start’ – SOTHD – is another driving, guitar wailing Editors classic – instantly recognisable and blessed with a lingering aftertaste.

The sign of a true wordsmith is someone who can take an ordinary moment in life we all know, crystallise it and make us stop and think about just how big life is, and at the same time how very small.

This may seem like an odd Morrisseyesque title for a song but in the context of the music it’s a simple observation that slams home with all the force and damage of an eloquently inscribed sledgehammer. How many times have you been to a hospital and seen someone rattling outside, clearly on death’s door and receiving treatment, but sucking hollowly on a fag?

It illustrates the ultimately self-defeatist trait of human nature – a sad indictment, beautifully voiced by one of the most accomplished bands out there.