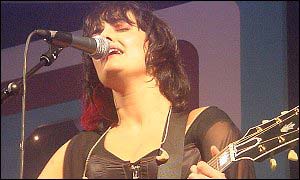 Early on, the Gwen Stefani and Gweno Saunders blending pitch of Cassandra Ford soars out, the sound system holds up and makes the show-time pop pearl ‘Metro’, come to life. The Vincent Black Shadow have an added keyboard kick tonight, promoting the live pang and complements the vocals of the decadent Ford to a tee. Flashy pop with soul entertains a keen gathering and extra pounce is provided by the jazzy drum-beats. The spiralling rock n’ roll of ‘Control’ brings memories of the energy and thrust of The Bellrays to the fore and Ford gets all cocky and feisty. Title track from forthcoming debut album ‘Fear’s In The Water’, builds upon a bass buzz and the hurried vocals gives the finale urgency and a haunting touch. The Vincent Black Shadow packs more moods into half an hour than Coronation Street.

All this fuss about touts on eBay, there is one solid way to avoid it. That is too possess such a live buzz and reputation for bringing power, the party spirit and variety to life at gigs that nobody would want to part with a ticket for your show. Granted, this option isn’t open to a great deal of bands, but for Kosheen it is a tactic that has been ingeniously deployed, keeping eBayers at bay for this performance. Through the sauntering vibe of new offering ‘Damage’, some early buzz is created. A swirling beat/bassline mix is just enough to create a bit of life, but the lyrics also make you intrigued enough to want to have several listens to it, when the album that it’s on is finally released over here, that is. ‘Overkill’, with its rumbling pop beats and the lingering vocals of the lively spirited Sian Evans, sprinkles some soaring heart and soul over proceedings, showing that freshness and Kosheen are still happy bedfellows.

Despite proudly looking forward a nostalgic Drum N Bass interlude sends hands aloft as though they are waving a heroine goodbye. Evans and co coaxes the crowd into sharing their renewed enthusiasm as the commanding welsh vocalist is keenly accompanied for the buoyant run through of ‘Catch You’. This has extra spice and catchy bite in such close knit surroundings, with this impact also being epitomised by ‘Hide U’. The latter parade hovering oomph, represents Evans’ most commanding and emotively potent vocal display of the evening. ‘Guilty’ provides a vibrant pop strut and sets out with friendly energy what true pop music is all about. Despite retuning in ruptures after being locked out of their dressing room before the encore, Evans gives the boom funk of ‘Wish’, extra projection, it seems. Dancing as nimbly as a ballerina at times, completing an electrifying hour of inhibition releasing.