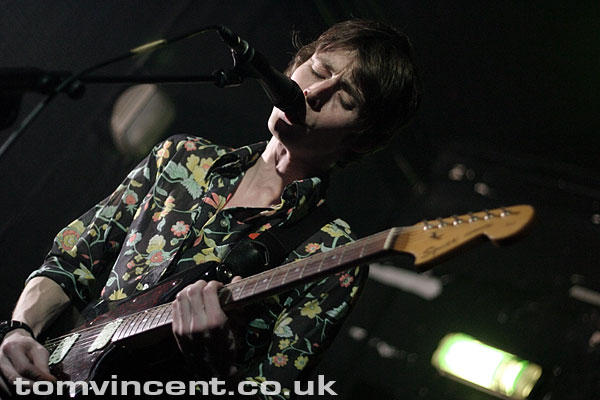 Gigs at the 13th Note can at times fall into two different categories. Either they can be a bustling, sweat filled dash for air in which, rather than a taxi, an ambulance would be better waiting for you outside afterwards. Or in tonight’s case, they can be a subdued, laidback affair where the lack of competition for pints at the bar can lead one to being served twice as fast, and therefore end up being twice as pissed.
This may be a Monday night, but there is no excuse lack of limbs inside tonight’s 13th Note. Take the band on show for example. A little bit of research will tell you that the Aphrodisiacs are a critics’ favourite. However for those of you who take no notice of what writers say (Ha! as if), listening to this bands track record(s) should be reason alone to expect a packed 13th Note this evening. Those of us who did bother to show up were treated to a very different kind of set to which a hardcore fan would be used to. The decision to strip their whole sound down to the basic Guitar+Bass+Drums formula may have sounded like a bad idea when first told about it, but what follows is a revelation. Each song is stripped to the bone and the complexity yet simplicity comes straight through the amps.
The fragile voice of frontman Stephen McFall evokes that of a weegie Elliot Smith and does just enough to guide the audience through each song.
Bereft of any modern day swagger (See *puke* the Twang), the Aphrodisiacs perform almost apologetically – as if they’re a schoolboy band performing in hope for an array of snobby Rolling Stone critics.
What they lack in any Ryder-esque bravado (hooray) they make up for in the fact they make honest indie tunes which, don’t need a hairy faced gimp telling the audience of how he’s ‘MMMMAAAD FOOORE IT’. They don’t need to be animated. They don’t need attitude. They make music which carries itself and even when the frontman does speak to the audience, “I think I left ma pint”, it’s a more than worthy comment to make.
With the band already having penned in a gig at Nice ‘n’ Sleazys, the question remains, ‘How many folk will show up?’ Lets hope they get the audience they deserve.