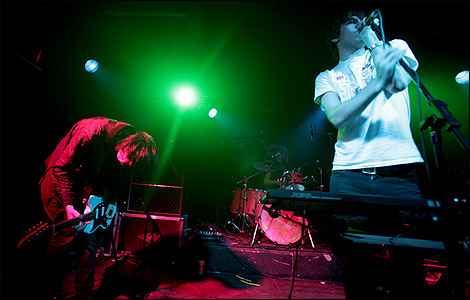 Glow sticks soar around like mayflies and excitement builds towards the front. Whatever the doomsayers say about NU Rave being a misplaced tag on a bunch of bands designed to create a stir, the anticipation and display here tonight, can only be a good thing. Sonorous New York duo Shy Child, show that they remember how rustic and uncompromising the Beastie Boys could be when they first started out. They add to this some driving percussion courtesy of the focused Nate Smith, the oomph of The Rapture and the spastic jolts of Whirlwind Heat to send the glow sticks skyward. Singer and keytarist Pete Cafarella, reaches a soaring falsetto pitch in the lingering ‘Drop The Phone’. The power and potency of contemporary duo Death From Above 1979, is matched in this frivolous parade of high tempo, heavy disco rolling.

Never mind nu-rave, the siren splattered ‘Atlantis To Interzone’, containing interludes of !Forward Russia! style yelping, is everything that old rave encapsulated and it sets the crowd off in spasms of high-hand held leaping. Although, the old formulae of a slow, incongruous build up followed by frenetic yelps of the catchy chorus is relied upon like a crutch tonight, the energy and range in the accompaniments keeps a sense of freshness in the air. ‘Totem On The Line’ leads off from a bed of nifty beats to into a mystical stomp that is cranked up a little tonight in favour of a dance-friendly vibe. ‘As Above, So Below’ is delivered with a needed calming touch by vocalist Jamie Reynolds. The flirtation with soulful beat-led pop ‘Golden Skans’, receives the most thunderous reception of the evening.

The pace is well controlled and that is the key to producing an embracing live set, for a band of this ilk. Although, the lack of an encore is a disappointing feature, it is probably a wise decision given the attention that was given to tempo building throughout the set. It would have been difficult to recapture that momentum.