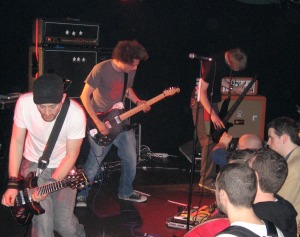 Wowing the crowd with an awesome performance of epic proportion 65days… debuted newly released material (Failsafe & When We Were Younger and Better) alongside staple favourites such as Retreat! Retreat! and the piano-led Radio Protractor.

Their supremely executed harmonisation of post-rock progression and electronic experimentation, epitomised in the sheer schizophrenic personality of 65 Doesn’t Understand You, thrilled all with its driving rhythms, dense instrumentation and impressive dynamic range.

For an instrumental band 65daysofstatic sure had a lot to say, be it symbolically, not verbally. The group used their impressive visual show (totally in sync with the music) to display not only Radiohead-esque animation but also statements of political intent; flashes of various global warming statistics along with anti-nuclear war footage and riot scenes gave a glimpse into the unsettling and concerned mindset of a band at odds with the current path of the world and its potential conclusion.

Yet 65days… passion was in abundance as the band encouraged and succeeded in allowing the crowd to disregard the metal barrier and stand at the foot of the four musicians for the majority of the gig. This served only to intensify an already rambunctious atmosphere, but credit must go to the well-behaved Nottingham audience who never threatened to get out of hand.

Sonically brilliant and socially aware, 65daysofstatic are a must-see act.