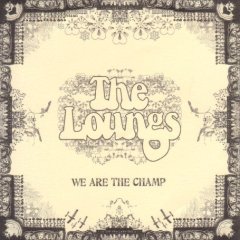 St Helens 6 piece, The Loungs release their debut album ‘We are Champ’ on May 21st and judging by this offering they could cause quite a stir. ‘Armageddon Outta Here’ boasts almost early Weller-like vocals with sombre lyrics accompanied by contradictory upbeat music.

It sounds like an obvious ode to a failed relationship, as the opening lyrics will testify ‘ So Let the Planes fall from the sky, For you know I wont miss you when you die’ but it is set to such an addictive foot-tapping beat that you tend to ignore the sentiment.

Second song Cats, is musically reminiscent of ‘In the Meantime’ by Spacehog. A real mixed bag of electrical noise coming from all over the place but it somehow fuses together and works perfectly.

The Loungs have arrived – Don’t be surprised if you are talking about, and listening to this band quite a lot over the coming months.