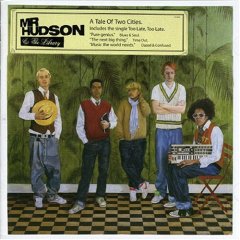 Mr Hudson & The Library – A Tale Of Two Cities

‘A Tale Of Two Cities’ is the debut album from Oxford-educated UK hip-hop producer Mr. Hudson and his band, The Library.

This band stand out. Firstly they’ve escaped the boring band name trap, and secondly they created much attention by doing a tour of weird locations. Like libraries. Then the music. Mixing grime, jazz and hip-hop it is a totally diverse album that really out shines all the other “indie” albums doing the rounds at the moment.

All the songs on this album are commercial without being cheesy and unintelligent, and they are certainly not pretentious and elitist. With a couple of covers thrown in (“On the streets where you live” from My Fair Lady, and Frank Sinatra’s “Everything Happens to me”), but bringing them into the 21st century (“I’ve emailed and I’ve phoned, sent a text message or two/ you told me to piss off and for that respect is due”), and these truly do fit perfectly to the fine songwriting skills of Mr Hudson.

Gently strummed acoustic guitars and gorgeous piano ballads make this album stand out. Excellent cutting lyrics, and perfect production, and a general feeling of quirkiness. Most bands without talent try to use quirkiness to hide talent, yet Mr Hudson & the Library are not that in the slightest. The album is so creative and undeniably good.
Mr Hudson & The Library make for a refreshing and eclectic change. There’s not a bad track here, and it wouldn’t be too much of a stretch to suggest that they could well become one of the biggest bands of the year.
Oh, did I mention, this album is cool as hell.