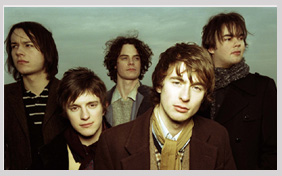 It was Southampton band Dead! Dead! Dead!’s first night as support on the Mumm-ra tour, and what a way to start it off. Seemingly unphased by the fact that the venue was pretty full when they went on, they proceeded to pull of a fantastic set, and most definitely succeeded in warming up the crowd!

Ripchord, the veterans of the support slot pulled off a set to be proud of. With view-esque sounds and catchy tunes, they were a sure fire crowd pleaser. To be fair, they’re pretty easy on the eyes too, but they seemed to be really enjoying what they were doing, and it showed by the crowd’s reaction.

“Put your instruments down lads, we’re having a duck lesson” Caws frontman James ‘Noo’ New, halfway through the Mumm-Ra set. It would seem that their plastic duck mascot, Matthew, has become more famous than them. Opening with “Now or Never”, they proceeded to wow the crowd with songs from their forthcoming album. The audience were manic, dancing about and really getting involved, and the band seemed to thrive off of it. With a reasonably long set, and unfortunately no encore, they finished with “Out of the Question”, and there is no question, these boys will go far.