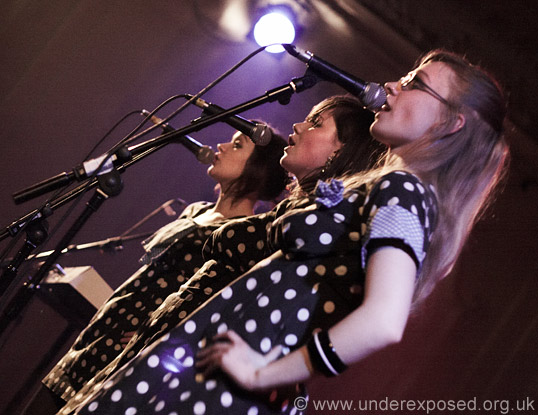 Fifties girl pop rock really made Manchester Academy move, like I’ve not seen it do for ages.

Turning up after worrying what to wear meant that we unfortunately missed the first two support bands, getting there just in time for Metrononmy. They seem to have caught on to this whole wave of electro pop indie, and although I had low expectations despite what I’d heard, they were fantastic. They got the crowd going and played good, fun, catchy tunes.

The Pipette’s band enter the stage and rock out, causing much excitement and anticipation. Three raging beauties, in coordinating clothes and polka dots enter the stage. Opening with “I Love You” and going on to play a plethora of new songs, which set to be sure fire hits on the next record, it is now clear why they’re popular, even if no one admits to it.

Captivating dance moves and repetitive handclaps made the Pipette’s show one that was far better than expected. It almost seemed compulsory to dance, and if you didn’t have a rhythmic bone in your body then their easy to follow dance moves made sure you weren’t left out! Finishing the encore with “We Are The Pipettes”, they sure should “have no regrets” after this truly brilliant performance.