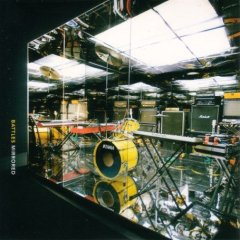 Finally it’s here. The importance of this record musically is no greater than EP C/B EP or any other previous release from Battles, it’s just about time we had an album of 10+ tracks (11 to be precise.) Offered to us as a culmination of all their previous influences and releases their material is all fresh and new. No one would have complained if riffs from SZ2 or TRAS had crept in, but without doubt this new selection is more subtly dynamic and complex in structure and maybe this is a necessity as many of the songs are based on single riffs or drum beats.

The instrumentalists and former NYC band members are redefining the modern band line up and with their assault on the mainstream beckoning with the release of Mirrored; their sub culture sound leaves no fears of them losing any integrity or their longtime fanbase along the way. As long as Battles continue to play live there will always be Battles fans who rate them higher than anyone else.

Opener Race:In sets the progressive standard whereas Atlas with its use of the pitch modulator and Ty Braxton’s vocal experimentation raises the tempo and excitement. Leyendecker is already a live favourite; TIJ is, one would speculate, an old song, as the band had stated their intention to ‘drop the anachronisms’ on this release. All in all, in Mirrored, the band have a record to call their debut album and a selection of new tracks to add to an already near complete live set.