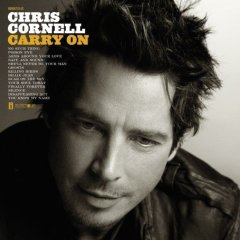 Chris Cornell – The Roads We choose – A Retrospective

Mr Cornell is an extremely shrewd musician, aligning himself with some of the best guitar players of the last fifteen years-Kim Thayil, easily one of the most underrated players of the grunge area and one of the best individual riff writers in recent memory and Tom Morrello with his Star wars meets Hendrix by way of Public Enemy individual style.
But to say someone is shrewd is to imply that on their own they have nothing to offer-that they surround themselves with talent and hope it transfers on to them. Chris Cornell’s retrospective ‘The roads we choose’ proves this is not the case and he is every bit the complete musician, both in terms of song writing ability and vocal talent.

The collection obviously centre’s around his work with Sound garden, which would be many listeners first encounter with Cornell, and suitably 7 of the 14 tracks are given to this part of his career.Soundgarden were challenging and interesting on record but inconsistent live, sometimes being brilliant other times never really capturing their ideas, but songs like ‘Black hole sun’ and ‘Spoon man’ are contemporary classics and listening to them again really illustrates how much Chris sounds like Robert Plant and just how mature his voice was even then. The inclusion of ‘Outshined’ shows the culmination of what the band achieved and has a fair claim to being one of the best riffs ever written.

Also on offer here is work done during his Temple of the dog period, and although the quality of the songs is undeniable ‘Say hello 2 heaven’ & ‘Hunger strike’ sound transitory as though they were merely a route to another sound.

Most recently, in a band form at least, the majority of people will be familiar with the Audioslave output. Many consider this super group to be something of a let down as the indivdual members were especially talented and never produced what was expected-some kind of hard rock second coming. If you can see past the expectations and preconceived notations they produced some incendiary stuff ‘Be yourself’ being suitably understated and well crafted. Had you put together a list of your own ‘Cochese’ would have probably made it on to virtually everyone’s, its absence here isn’t noticed though-because the riff heavy song would have potentially moved away from Chris as the centre point. What is missing is the track ‘Shadow on the sun’ best used in the film ‘Collateral’ and contains some of his best vocal work, and would have also served as a bridge to his film work and more commercial side.

Chris’s Bond song ‘You know my name’ will be his most well known calling card to date and where most rock acts struggle to carry the weight of such a big franchise and come off worse-Sheryl Crow for example, Cornell gives it a dignity and fire whilst still maintaining his own style.
This entire package is designed to lead you to his newest album ‘Carry on’ and book ending the retrospective are ‘No such thing’ and ‘Arms around your love’ these serve as samplers of upcoming work and although there are no surprises- the songs are more commercial and presented well- Chris has gone from dark to light in terms of song writing with an altogether more positive outlook.

There are some rarities here in the form of acoustic versions of ‘Original fire’, ‘Like a stone’ and ‘Black hole sun’ but they have been on offer elsewhere- ‘Black…’ being the B-side to the Bond song and the others taken from the Audioslave clear channel stripped sessions-but the walk through Chris Cornell’s material is a welcome one and anyone who missed out on pivotal moments in his career have the perfect travelling companion for the journey into his future work.