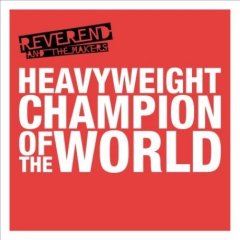 Reverend and the Makers – Heavyweight Champion Of The World

It’s a couple of years since I first heard The Reverend. I seem to remember him springing up at the same time as the Arctic Monkeys put Sheffield back on the music map. Since my first listen, he seems to have diversified his sound into something closer to Ian Brown. Whatever the sound, it has something very northern and charismatic about it.

The music bounces along inoffensively whilst The Reverend performs that kind of sing /skat that we all loved so much during the golden age of The Stone Roses.

Overall however, this release ‘Heavyweight Champion Of The World’ is, if anything, a bit lightweight. It’s reactive music that seems to borrow from other styles and artists rather than generating a novelty factor of it’s own.

It’s accessible and quite catchy but disposable. Strangely, every time I listen to the track, I have a sneaking suspicion that it was written by the guys who did the songs on Spitting Image.

Whilst The Reverend is a talented musician, I want to hear a little more soul and substance in his songwriting.