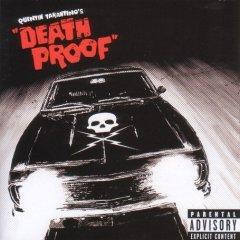 “Hey Warren, who is this guy?”
“Stuntman Mike”
“And who the hell is Stuntman Mike?”
“He’s a stuntman.”

Tarantino’s new OST for Death Proof, part of the double B-movie release Grindhouse is a typical offering of sixties and seventies classic and not so classic tracks.

The most familiar names should be T-Rex and Ennio Morricone and as usual thrown in are several novel soundbytes of ultra cool that make you want to see the movie, which is the main reason to release an OST, no? Especially mouth watering as this comes months in advance of the film’s UK release.

The director’s last musical release was the Kill Bill OST and before that Pulp Fiction and Reservoir Dogs. All classic releases and as important soundtracks as any modern day compilation.

So Death Proof is another one for the collection. Can we now judge Tarantino on his knowledge of swinging tunes in the same light as his extensive film knowledge? Surely not, after all, the tracks on these releases only work their magic fully in the context of the scene they bond to. Serving as a reminder of the scenes they partake in just as the characters do.

Aside from the Smith track, ‘Baby it’s you’ and Pacific Gas & Electric’s ‘Staggolee’ there are no true classics that jump out like Miserlou or Stuck In The Middle seemed to leap from the record, but until the film is released who can tell which is the stand out track from this collection? After all who would of thought it could have been ‘Woo Hoo’ from Kill Bill 1?