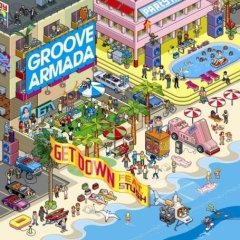 Groove Armada – Get Down feat. Stush

You might be of the mindset that Groove Armada are never going to do anything better than ‘If Everybody Looked The Same’, so they might as well give up. If you are, then I do sympathise with your point of view, but if for example, we’d told Oasis that they were never going to beat ‘Definitely Maybe’ then they’d never have given the world ‘The Masterplan’, so perhaps a bit of flexibility is in order.

Groove Armada’s Tom and Andy have always been more than capable of creating a single that stands out from the rest of the charts, and they’ve been successful yet again with ‘Get Down’. With female vocals that sound half Jamaican and half Lady Sovereign, and an electro beginning that brings back Sonic the Hedgehog flashbacks from the Sega days, it’s a menagerie of music. Somehow though, the boys take these apparently contradictory components and blend them seamlessly into a tune that will have clubbers gyrating spectacularly in sweaty environments, and might even convince Northerners to warble along in a Mockney accent to certain bits.

A terrifying scene, I’m sure you’ll agree. But once you’ve heard the single, you’ll be proud to be a part of it, and you’ll go as far as practicing some breakdancing moves in anticipation. Just don’t hurt your back.