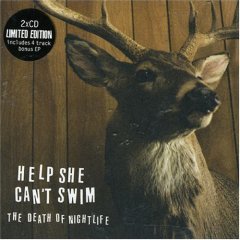 Help She Can’t Swim – The Death of Nightlife

Help She Can’t Swim’s debut album The Death of Nightlife is everything you would expect from this four piece, signed to indie label Fantastic Plastic Records. Here they have taken guitars, keys, bass, drums and shared male and female vocals and mashed them all up into a loud, screaming and bleeping debut.

Album opener Pass the Hat Around starts rather sweetly, dipping from loud to softer sounds and containing quaint lyrics such as, ‘Turn that frown upside down’. Suddenly screams of, ‘can we just enjoy this please’ leads to extra added speed and volume before ending on a soft pleasing note. It is something of a rollercoaster of an opener.

Sadly the rest of the album doesn’t quite live up to this. While the songs are all good enough they lack any individuality as they all follow similar song structure and contain largely incoherent lyrics.

Idle Chatter and Killing Eat Trees are good, both containing bleeps that sound as though they have come straight from a video game, while Apes and Pigs at the Vulture Coliseum, I Think the Records Stopped and Midnight Garden introduce some extra male and female screamo vocals over many squealing guitars and pounding drum beats.

Box of Delights is one of the better tracks as the shared vocals are softer and the song is a little sweeter. This is almost their attempt at a love song with lyrics about lying in bed with loved ones, but only almost.

The ending track, like the opener, is full of highs and lows with fast and slow parts. It contains some fast paced drums but much softer vocals, which makes for a rather nice contrast.

Overall this is a decent album and if you are a fan of Help She Can’t Swim you will be a fan of this, but if not then stay well clear or it will just fuel your dislike.