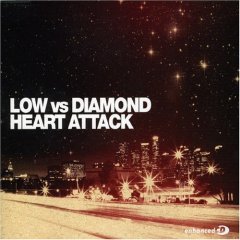 There’s a saying that goes something like ‘if you never expect anything, you’ll never be disappointed’. I’ve decided this is a brilliant stance to take with regards to music, because not only do you avoid the come-down when your favourite band’s new album is shit, but you might also get a pleasant surprise now and again. For instance, I wasn’t expecting anything but blandness from this Low Vs Diamond single, so the fact that the singer’s velvety tones and the song’s fish hook of a chorus are now lodged in my brain has brought an unexpected happiness to my day.

Sounding like the closing song of an uplifting film, or perhaps one of those songs that just exemplifies drunken summer days long after the nights have started getting longer again, ‘Heart Attack’ begins with a subdued air then builds to a euphoric crescendo that lasts but a few seconds – much like a real heart attack, except with less wheezing, chest pain or the risk of death. If there was a musical term for onomatopoeia I’d be using it right now, as the structure of the song really brings back the feeling of a rush of emotions, and leaves you a little bit drained but also smiling.

B-side ‘Life After Love’ showcases their ability to perform just as well without the benefits of a huge-sounding band, as the song is an affecting acoustic ballad (not an indie reworking of Cher’s ‘Believe’ – though wouldn’t that be a brilliant challenge for a self-respecting rock band?). However, the supporting tracks can’t touch the main single in terms of sheer magnitude. A definite hit for the coming months, ‘Heart Attack’ will be the platform from which this band begins their ascent to the big time.