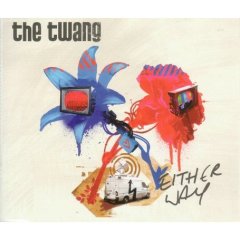 The Twang – Either Way

So it’s finally being released, even though we’ve all heard it a billion and one times already and could sing it backwards in our sleep! Now you have the option to buy the rowdy brummie hooligans new single (still at least there’s b-sides!)

Blessed, or cursed depending on your own particular disposition, by enormously outlandish tags. According to the NME and others, The Twang are ‘Britain’s best new band’, ‘the new Happy Mondays’, ‘the new Oasis’ and all that lark. The hype around The Twang is at such a level it seems like it might even get past the freshly ground out Arctic Monkeys notch, having passed the Gnarls Barkley cut way back.

So to say they don’t live up to the hype is not as harsh as it sounds because, frankly, very few bands could! They’re a good band but not a great one. They have the image, the swagger, the quotes, the rock n roll antics but unfortunately, just not the tunes.

‘Either Way’ is a decent song with a half decent riff and a catchy hook and has a warm “I luv yar” charm. But the lyrics are painfully basic and sound like quotes from some pissed chav outside the local on Friday night, “I was getting paranoid about the silliest of stuff” “I’m always gonna have shit goin on” “And I’ve Gotta find my phone to tell ya, maybe even write you a love letta”.

Like I say, not bad, just seems to lack this abundance of talent everyone appears to think they have?! Maybe the album will awaken it from it’s bastard of a hangover?