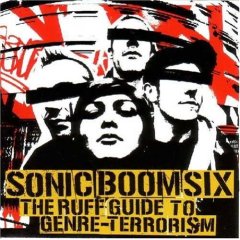 Released June 2006 this is a retrospective review of one of the albums overlooked in last years polls of Best Album Of 2006. Check it out!

The word on the street that’s steadily taking Manchester’s SB6 skyways; is it just hype?

Well, having their sample supported, genre mixing sound featured on both BBC T.V. (Desi DNA) and radio (Radio 1 Lock Up sessions) and doing their thing at Glastonbury (bigging up the Love Music Hate Racism movement) is quite something for a band that haven’t really made any waves in the six intermittent years since their debut release, their 2001 6 track ‘Same’ E.P. So what have they been up to you might ask. They’ve supported Mad Caddies, Flogging Molly and Hard-Fi as well as numerous other bands of a similar calibre. Taking all this into account, it’s sorely obvious that this, their debut LP ‘The Ruff Guide to Genre Terrorism’ released just under a year ago, was and still is, criminally overlooked. Here is a band with as much diversity as you could shake a stick of diversity at, with songs strong enough to entice even the most sceptical of listeners. Tracks 1, 5 and 11 are my personal favourites.

To summarise, if Soulwax were a ska act, you could expect this as standard solid produce!