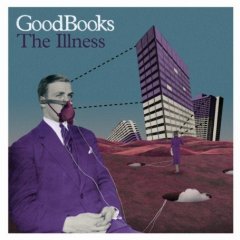 And when the vocals kick in your attention is being pulled in three different directions, though sadly the lyrical content isn’t particularly apparent as the voice becomes another part of the musical storm that is building up underneath it as all the instruments clang, chime and sing out together in a spectacular cacophony.

‘You wake up, you’re older,
Your plans just got smaller,
Your children smile,
You never even thought that you’d still be here,
Today’

Perhaps the illness being pondered is the woe of modern day living, where it leads us and the loss of who we thought we once were, the concept of fragility and futility of modern life is comparable to Bloc Party and this is not the only similarity that can be angled at this song, both bands share a sound that builds and soars and lifts them above the common influence of brit-pop while the Illness also takes in shades of the dance driven, cowbell obsessed sounds of The Rapture.