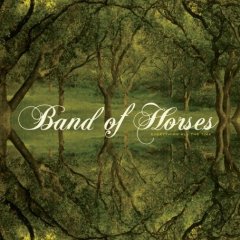 Band Of Horses – Everything All The Time

Band of Horses were formed after the break up of “Carissa’s Weird” and signed to Sub Pop records. This album is not a bad album, and its not overly bland, but it lacks innovation and is well on its way to being yet another insipid indie rock album.

The record has some heavy guitar sounds and although it is samey throughout it has all the elements of a great emo-pop record, the riffs, the vocals, the lyrics and the beats, but they just don’t line up right.
There are several must hears on this album, “the Funeral” is an emotional and dark song, but sung with no emotion, however “Our Swords” is a fantastic all round song. “Wicked Gil” and “Great Salt Lake” really boost the album with the shot of adrenaline that it really needs.

This record should be as prestigious as Band of Horses’ label mates, but in reality it never will be. It is a good, no frills, thoughtful, relaxed, full yet blissful American rock album, but lacks something to make it sell millions.