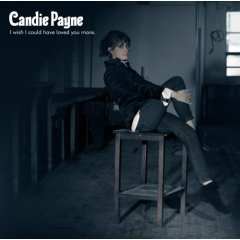 Candie Payne – I Wish I Could Have Loved You More

Remember that wise old saying ‘never judge a book by its cover’? Well, it most definitely should be applied here. I must admit I read the artist’s name, saw the words ‘Candie’, ‘Wish’ and ‘Loved’, and thought it was going to be another heartbroken girly-girl singing about the one that got away. How wrong I was. There’s obviously nothing wrong with the girly-girl thing, there’s just enough of it, for the moment at least.

This, on the other hand, is a much needed, refreshing style that oozes with the glamour one might well associate with Dusty Springfield or The Supremes. Candie Payne has created her debut album into a marvel that is soulful, ranging from sultry to melancholy. Seemingly infused with influences of the 60s, this is a modern take on white-soul. Candie’s voice is wonderfully clean, complimenting the music beautifully.

In The Morning is not too dissimilar from the style of Morcheeba. The slow, rhythmic and soothing vocals, with the laid back pace, create a sense of relaxed bliss. The album is versatile. On the one hand it is easy to envisage it becoming the basis of a film soundtrack. On the other hand, it might become one of those summery favourites; apt for lazy, hot and hazy days, with little else to do than to sit back and relax.