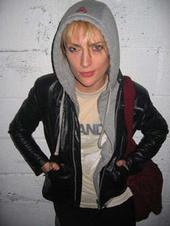 To be able to orchestrate music that accompanies a demonic rabbit is quite a feat, but a close knit seated venue with just you and your acoustic guitar wielding buddy in tow, is quite another. Arranging the music for the cult classic, Donnie Darko seems like a walk in the park tonight, as an attentive seated audience looks on expectantly, like kids at story-time. Michael Andrews and his cohort, interweave slow and thoughtful acoustic patterns, around his slumbering vocal gait to create an air of peacefulness. By inviting questions from the audience and openly discussing the off the cuff set list with his colleague, a relaxed vibe is created with comfort and ease. Promoting his stirring ‘Orange Meets Lemon’ album, this Californian emotion forager displays the commanding craft of Kieran Hebden and stands proudly as a truly independent musician.

A series of slightly disturbing images appear on the projection screen behind Emily Haines. It’s as though the Metric front lady is hosting a documentary on the inception of the Horror genre. We are amiably informed that the visuals are the work of Guy Madden, an understated indie film-maker. These images slot in nicely with the creeping, ambient piano and programming touch. Opening track ‘Our Hill’, from the just released ‘Knives Don’t Have Our Back’ album, commences the climb up a philosophical peak.

The mystery of Tori Amos oozes out early on, poetic searching and pining opens up the world of a pondering thirty-something. Piano keys are stroked as though they are several stress balls for the slow catharsis of ‘Crowd Surf Off A Cliff’. With a wild glint her eyes, Haine’s informs attentive gatherers that this is precisely what she did when she last came to Manchester. The lullaby stroll of previous single ‘Doctor Blind’ is that catchy blues/folk, yearning hook that the evening needs. It is a though the heart of this enchantress leaps onto the roof of the piano and faces her whilst she’s playing. This feeling continues throughout and the tempo doesn’t drop a notch, as eyes flit from pianist to programmer and onto creepy projection clip. Each element is an integral part of the intimacy and mood.

The trundling noire roll of ‘Winning’ encapsulates a slight Bjork tug and eccentricity, to eek out even more feeling;

“Don’t even visit that place; they’ll sharpen their teeth on your smile.”

It allows Emily to leave the stage in the knowledge that she has given a city that hosts on average four gigs a night, something that you can’t quite put your finger on.