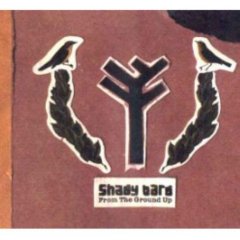 Shady Bird – From The Ground Up

It’s interesting to see that this band think of their music as ‘Folk’. It seems that anything with an acoustic guitar can be classified as folk these days. In fact, it’s the genre used by bands that don’t want to call their music ‘pop’, which, of course, most new ‘folk’ music is. Shady Bird is no exception.

That said, the music is like a pleasant mixture of Snow Patrol and Adem. It’s got a coffee-table accessibility but has character and variety that Snow Patrol doesn’t possess. Hence the Adem reference. The vocals, are heart felt and nicely delivered amidst airy pianos and easy guitars that would have problems offending anyone. There is also a depth to the music that takes you on a slightly different journey with each new song, akin to the excellent Adem. ‘Memory Tree’ for example, is a wonderfully contemplative and slightly mournful track that uses a keyboard/vibraphone sound which is as enchanting as it is simple.

And the music isn’t one paced like Snow Patrol. There are nice tone and tempo changes throughout the album which take you from nostalgic slumber to something much more frantic and grand in the space of a couple of tracks. It’s not only sweet and melodic, it also has the anxst and ultimate triumph that the excellent vocals of Lawrence Becko lend the music.

I really like Shady Bird in the same way that I like the music of Thom Yorke, Sufjan Stevens and The Arcade Fire. It’s about songs, melody and individuality. And it works very well indeed.