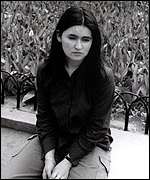 Downstairs inside a decaying and half-empty Borderline on an uncomfortably humid Thursday night, a listless atmosphere pervades a room which feels more like a working man‘s club than a venue.

Scattered groups of people, some sitting at tables, some propping up the bar, watch the support band with apathy and disinterest, with many preferring to glance at the TV screens hung sporadically from the ceiling which are broadcasting what is on a stage only metres away from them, rather than confronting the band with their glares of disapproval or disappointment. Despite the sheer volume of noise the Glaswegians manage to emit, barely an eyebrow is raised, not, it later becomes clear, because the crowd are anticipating significantly greater things from former Delgado Emma Pollock, but because there seems to be an underlying unwillingness from this – it has to be said – more mature audience, to support a band they have not heard before.
By the time Emma comes onto the elongated but low to the ground stage, a more sizeable crowd has gathered. Her strong vocals accompanied by intricate keyboard arrangements – as well as the generic two guitars and a drum kit – momentarily distract us from her mumsy appearance and general lack of showmanship. Coming from a woman who fronted one of Glasgow’s premier indie-rock outfits of the late 90s and early 00‘s, to say that more of a performance was expected would be an understatement. Instead, song after song of fairly standard indie rock, without the sweeping violins or crashing cymbals which the Delgados frequently incorporated to huge melancholic dramatic effect, fails to leave much of an impression either musically or visually. For such a small woman, her voice is surprisingly deep and powerful, bouncing off the corners of the room, but it seems wasted on the material she plays that could easily be compared to the sub-standard ‘rock’ singles being thrown about by any number of female – admittedly successful – musicians in the charts at the moment: Kelly Clarkson, Katie Melua and so on. There is a distinctly more commercial flavour running through her whole set, and as the performance progresses one sadly realises that the quirky, dark sentiment that the Delgados encapsulated must somewhere over the past two years have been lost.
Despite this, at times we are reminded of the woman she once was, playing the tormented lover with the gusto of her former self;
“what did you talk about with her?”
But without the corresponding vocals of her former counterpart, Alan Woodward, these lack any real depth or contrast. New single ‘Adrenaline’ is possibly the most commercial and disappointing track of the whole night, though by this point the middle-aged, middle of the road, audience are clearly quite enjoying themselves. Self-contained bopping and swaying are the moves of the night, although no one quite dares themselves to break into a dance. Emma’s repeated ‘thank yous’ and apologies, although sweet and, one has no doubt sincere, seem unnecessary and over the top and by the end one begins to wonder if she is subconsciously trying to distract us from the monotony of the music with all the humble banter. Any air of mystery has by this point evaporated and the feel of the whole show is anti-climax.