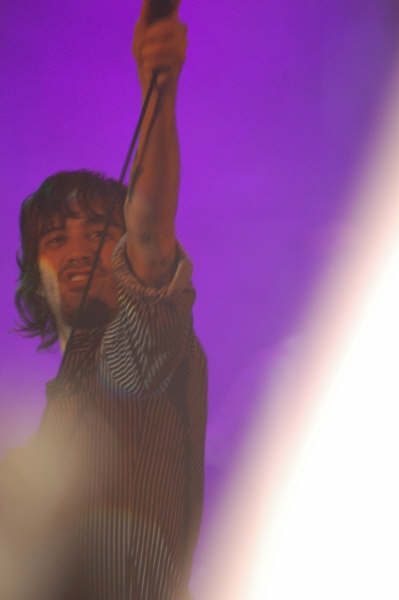 Given the rarity of Head Automatica’s live appearances outside of the US, tonight’s support band could have been the Beatles and they’d still have been overshadowed by the mere anticipation of the headline act. The fact that Nex, the actual support band, were pretty terrible means they might as well not have shown up at all. Hailing from Huddersfield, the group have a sound with encompasses such diverse styles as screamy-metal to almost boyband-esque melodies. It’s interesting, but the screams just don’t cut it and the melodies just don’t fit, so the band sit on the fringes of any discernable genre. Perhaps on CD the dynamic would be more balanced and sound way better, but tonight, everyone in that venue would have preferred the second support slot to have been extended and for Nex to have fucked off.

I say ‘slot’ instead of band, as instead of another disappointing bunch of amateurs whiling away the minutes to the main attraction, someone had the genius idea of getting NY-based DJ Krazyglue (better name!) on the decks, throwing out some sick mixes. Joined periodically by Daryl Palumbo, who was obviously determined to make the night into as much of a party as he could, Krazyglue turned the room into a hub of entertainment, inviting people onstage to dance and pumping up the crowd more than any local teenage band could ever have done, while setting the perfect tone for the diversity of Palumbo’s crew.

Having gained an undeserved reputation for unreliability, Head Automatica are clearly out to prove a point tonight, on what they confirm is their first proper tour outside of America. Academy 2 is packed out, and the fact that the gig is here instead of the bigger A1 (which is being renovated) is a fucking treat for those who managed to get a ticket. The air is pregnant with excited expectancy, and everything kicks off as soon as the band steps on stage. The first notes of ‘At The Speed Of A Yellow Bullet’ ring out, and I join everyone around me in throwing ‘disdainful cool’ to the wind and dancing like a happy child on Christmas day. Led by Palumbo’s love for funk-infused pop, we all get our groove on to such favourites as ‘Brooklyn Is Burning’ and sing along with the best misheard line ever, “baby is this slut for real?” when the time comes in ‘Beating Heart Baby’. Keeping chat to a minimum, Palumbo is energetic, enigmatic and effervescent, yet in the brief moments between dancing and posing, his fragility is painfully apparent. It’s fleeting, and seconds later he’s leading chants of “you’re L-L-lying through your teeeeeeeth…” but its obvious that beneath the confident, attention-loving exterior lies a strained and exhausted physiology.

To the people in Academy 2 tonight though, Daryl is nothing short of an idol – a figure of innovation and unapologetic pop sensibilities. Drawing even more unadulterated admiration by stretching to a 4-song encore, the band build up a layered finale then drop the instruments out one at a time, each member leaving the stage as their contribution is over. This leaves only the keys player to soak up the rapturous applause thrown at him, and clearly, he loves it.

There are no words to adequately describe the innocent brilliance of this gig, so start praying that Daryl’s illness doesn’t stop the band from gracing these shores again, because everyone should experience the live whirlwind that is Head Automatica.