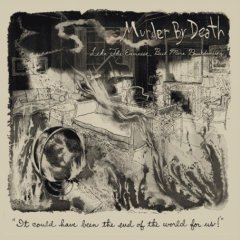 Murder By Death – Who Will Survive And What Will Be Left Of Them? / Like The Exorcist, But More Breakdancing

Whereas In Boca Al Lupo jumped out the stereo and wrangled tears of joy from your body upon its first play, the two previous Murder By Death albums, largely unheard bar recent UK tour airings, somewhat stifled the suggestion MBD have always been an underrated band.

These two albums require something different from the listener…listening.

“I listen to all music”, I hear you say, but I propose that the finest music requires you only to hear it to rejoice in its beauty and architecture.

When the seminal workings of In Boca Al Lupo first rang out, the songs filled the ear, the lyrics were immediate, clear and concise, whilst the music chilled your spine and tingled your skin. Please, if you felt it back me up.

Like The Exorcist, But More Breakdancing and Who Will Survive And What Will Be Left of Them? give the impression it took Adam Turla this long to f**k his throat up with whiskey and cigarettes to obtain the gravelly larynx he sings with as MBD traverse the globe today.

As a collection of work, these albums stand as bodies of music in their own right. Like The Exorcist, But More Breakdancing features a certain track by the name of Those Who Left. Eight minutes of progressive and graceful dark poetry, an epic instrumental and live favourite.
Its themes are more detached and varied. Edward Albee’s ‘Who’s afraid of Virginia Woolf’ and Stephen Kings ‘Shawshank Redemption’ are referenced in song titles on ‘Like The Exorcist…’
‘Who Will Survive…’ develops these ideas further and contains more familiar material in the MBD live catalogue. The Devil in Mexico, Killbot 2000 and Three Men Hanging stand-out tracks on the first half of the record and exemplify the darker themes present in the concept of ‘Who Will Survive And What will Be Left Of Them’

The themes are rigid and the imagery vivid, Sarah Balliet’s cello is equally prominent and unerring, yet the main difference is Turla sounds, younger. A lot is down to the production work of J.Robbins on In Bocca Al Lupo and these re-releases partly serve to add weight to the one-sided argument Murder By Death’s most recent offering is, and likely to continue to be, monumental.

Two albums that tell the story of the journey of one of America’s great current bands and how they came to sound the way they do today. Essential listening. 5/5.