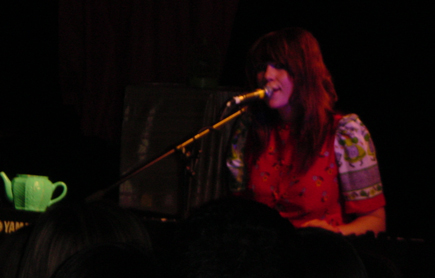 The loft is absolutely rammed tonight, as everyone gets ready to fall
hopelessly in love with Kate Nash but before that we have to endure To My
Boy. The scouse pair have been making decent catchy electro madness and promising to break out for a fair while now but they haven’t managed to improve their live performances in that time.

Starting with their best tune is never a wise option but ‘Outer Regions’
opens the set anyway and it all generally goes downhill from there. The main problem with the band seems to be that because they rely on their computers (newly docked out with “To My Boy” sticky tape) for their beats and tunes they’ve got no freedom to change the tunes from gig to gig. Plus the added fact that watching two guys with guitars jumping around in front of their laptops feels a bit too much like perving through the window on some remedial kids.

The second Nash walked out on stage though, with her two-piece band behind her, the world felt that little bit more cheery. This girl’s got one hell of a stage presence, she doesn’t say a great deal or even do a great deal but what she does just makes you melt. That sounds a bit weird and limp but every guy in the Barfly was fixated on her for the whole set. She won the crowd over in about 10 seconds.

She chucked out previous single ‘Caroline’s A Victim’ early on but it was
transformed from a weird, dark, dancey beast into a summered, near Jack
Johnson lullaby. It also made the tune come alive in a way that was
unthinkable and made you wonder why the hell she released in its original
form in the first place.

‘Birds’ was perhaps the standout – all fluffy, cuddly and irresistible and
it was great to hear the crowd laugh along to Nash’s lines (“She
said…what?”). Its rare these days to hear the crowd laughing at an artist’s
lyrics (Hot Club de Paris gigs may be an exception) but Nash got them going throughout. She’s also a surprisingly good guitarist and pianist which you don’t realise from her recorded output. This girl can do it all.

‘Little Red’ was brilliantly Regina Spektor and ‘We Get On’ sounds like a
future hit but the biggest cheer of the night was reserved from next single
‘Foundations’ and as good as it is on record, it was amazing live. With
loads of press and her video all over the music channels, ‘Foundations’
looks like it’s going to make her huge and she deserves it. Lily Allen
comparisons will stop pretty soon because whilst they may both have the same style of witty lyrics and occasionally the same style of delivery, Nash is far superior. She’s got a charm and a warmth to her that Allen’s nowhere near. Pray that the fame doesn’t go to Nash’s head because right now she’s pretty damn perfect.