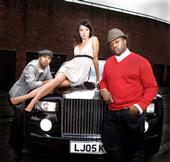 THE RELUCTANTS – Is that what you want?

The sound created by ‘The Reluctants’ summons images of ‘Fatlip’ joining ‘Jamoroquai’ for a shindig down in ‘Destiny child’s soul kitchen to cook up some nice ragga muffins! ‘Knowledge’ one of two MCs in this trio, alongside ‘Mr Dutty’ or ‘MD’ as he’s known to his friends and ‘Maiko’, the newest member, intermittently providing the luscious lady lungs, all work fluently off each other and initially, its a tasty treat for all.

Upon closer inspection however, it becomes regretfully apparent that their sound just isn’t strong enough to hide their failings in the songwriting department. WHAT?! I hear you scream! Their collective career boasts of writing, producing and featuring alongside the likes of ‘Shola Ama’ and ‘Maxwell’ and MOBO declaring these guys as ‘ones to watch’. I can’t disagree that these guys have got something ahead of them. They’ve got plenty of musical talent and chemistry. But what they haven’t got is the songs. On this 4 track E.P. each song entices you and pleases for a minute or so, before it simply seems to fall victim to the good old reliable looping program. After hearing these 4 tracks, I’m left with some well crafted moments that are lost and adrift amidst each run of the mill song.

It seems that the unit shifting monkeys are rampant in the urban scene, just as they are in the world of rock. The bar is lowering people. We need to stop it now and just say no! Accepting every shiny new act that the industry can cram down our ever deafening ears is damaging the future of music. We’ll all be treading water in tepid seas of song, saying ‘whatever’ to everything we hear, before seeing it top the charts for a week. Not dissing ‘The Reluctants’. They’re just not ready to command the podium that’s being built for them; although I’m sure they’ll climb aboard anyway. And why not?!