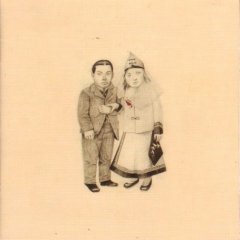 The Decemberists – The Crane Wife

In a series of retrospective reviews, Glasswerk.co.uk looks back on some of the great albums of all time. Starting with a band from Portland, Oregon, on the west coast of America who you may or may not have heard about. The point is…you really should have heard of The Decemberists by now. This album The Crane Wife was released last October and, like an instantly vintage wine, is already showing signs of standing the test of time.

Criminally overlooked band The Decemberists latest album The Crane Wife was released last year and it is well worth seeking out. This, their forth album, is one of the most thoughtful and essential folk/prog albums released, in well… since their last album Picaresque in 2005.

The opening track The Crane Wife 3 completely showcases the bands sound in a song: thoughtful lyrics, booming percussion and an absolutely faultless tune. The albums second track blends three songs together into one full song. It is frankly amazing: most bands don’t display this kind of versatility and invention in a whole album let alone in a single track. Even though the band take a lot of influence from seemingly “uncool” 70’s style prog, they completely bump their sound up to date and draws the listener in. This is perfect storytelling as well as great song writing, the music extenuates Colin Meloys lyrics and is like listening to old sea dogs stories whilst taking the most powerful hallucinogenic drugs known to man.

The album is near faultless with not a moment of filler from the sweet duet with Laura Viers, Yankee Bayonet (I Will Be Home Then) to the albums first single O Valencia! which sadly seemed to get more press in America for their televised guitar contest with The Daily Show’s Stephen Colbert rather than the fact that it is a great indie pop single. Although the whole Colbert/ Decemberist fued is well worth watching if you missed it.

The band display a huge diversity of range on this album, tracks like the Perfect Crime 2 is a great funk track, heavily influenced by bands like the Talking Heads yet keeping the incomparable Decemberists sound with ever present Hammond organ and amazing guitar work from Chris Funk.

The album penultimate track The Crane Wife 1&2 is a huge 11 minute epic which I’m sure you won’t find on any Orson album in the near future. This song is beyond beautiful where Meloys vocals blend superbly with the strings and organs backing. When the drums finally kick in you can’t expect it to get any better but boy oh boy does it get better: it suddenly turns into Belle and Sebastians Boy with the Arab Strab doing a sailors jig. Only bands as good as the Decemberists can take the listener on such an amazing and original journey through music, easily as good as anything on Neon Bible.

This is a band who know who they are and they know how to make amazing original music. The albums closer Sons and Daughters finishes things off perfectly: the harmony is perfect, the pacing is great and the lyrics are thoughtful. Not that many albums give you the accomplishment and feelings of pure amazement and like a mad person you will play this album again and again: this album is essential and bloody marvellous.