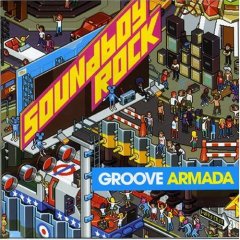 The dance veterans return ready for the summer of 2007, in the hope of making the big dance record of the summer. Sadly, it just misses the mark too much to really make an impact.

From trip-hop highs to chill out lows, this is arguably Groove Armada’s most eclectic offering to date, it moves admirably from one dance sub-genre to another without much effort. But it just doesn’t work most of the time, and ends up being just a bit forgettable. Another problem is that with so much going on it ends up lacking a general flow, which is a really dangerous thing for a dance album.

One song deserves a mention, “Song 4 Mutya” a collaboration with ex-Sugababe Mutya Buena. Pop fans will undoubtedly love it, but it lacks the crossover feel that is needed to make the big summer hit. No, that honour will fall to friend of Groove Armada, Mr. Calvin Harris.

Sadly Groove Armada hasn’t supplied the summer dance hit that everyone will soon be begging for with “Soundboy Rock”, and they haven’t supplied much else either. At the best of times it’s an nice effort to branch out into other sounds, but perhaps more of an effort next time, boys?