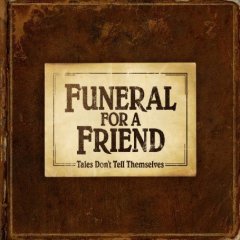 Funeral For A Friend – Tales Don’t Tell Themselves

It’s important for bands to grow, it helps them survive; discover new edges and borders to their sound. Sometimes however they run over those edges and cross those borders, losing sight of their sound and identity, ultimately failing-growth can be painful.

‘Into the oblivion’ represents some of that growth, the first single and opening album track is the furthest FFAF could go without completely taking away their own sound and manages to hang on and come away with a song that is memorable and will no doubt find a place in the set, even if it means another, more deserving song from a previous album has to go.
Everything is less complicated this time around, and where this would normally be cause for excitement it’s one of the major factors in the downfall of the album’s sound as the interplay between guitarists is virtually non-existent and where they would normally grind and entwine with each other, they now play similar lines and go for power and more simpler sounds.

There are some hints and twists here with the female voice in ‘The Diary’ being unusual and working well-but once again it moves to an area FFAF should really move away from-namely the more commercial end of the spectrum and styles already on offer by other bands.

The two connecting songs ‘Raise the sail’ & ‘open water’ are meant to be the culmination of the albums central theme but ‘Raise..’ comes across as messy and confused, which may have been slightly intentional- to preempt the calm reflective view of ‘Open…’ but it fails to reach a point FFAF are already struggling to make.

The presiding theme of the album, being away from loved ones and familiarity helps personal development and colours a more interesting life, are intact but Funeral for a friend have sacrificed their sound and style to obtain it.