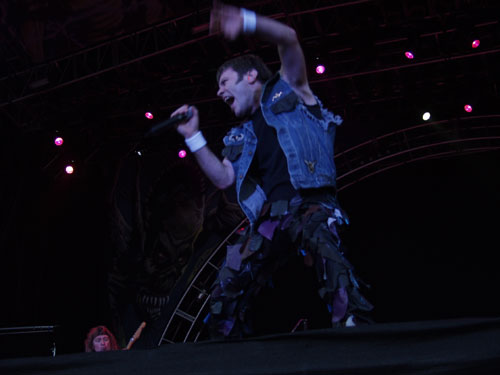 After a 3-day festival which featured the likes of Velvet Revolver, My Chemical Romance, Slayer and Linkin Park, Maiden took to the stage to close proceedings on the Sunday night.

Tonight marked a special point in Maidens career, as this was to be their forth headline appearance at Donington Park, clearly given testament to their 30 year career. Tonight’s performance saw Maiden continue their ongoing summer tour named “A Matter of the Beast”. Tonight’s setlist would feature songs from the “Number of the Beast” album, marking its 25 year anniversary, and songs from their recent album “A Matter of Life and Death”

Maiden kicked off their headline show with 3 songs from “A Matter of Life and Death album”, opening up with the song “Different World”. Controversially, on their previous tour last year, Maiden played their whole new album in one swoop, emitting a lot of their classic set list. However tonight would be different, with the inclusion of songs from the classic Beast album, everybody was in for a great performance.

The crowd erupted when Maiden broke out into“Wrathchild”, and during this song, even Bruce was overcome as he slipped when trying to stand on the Mic Amps. Despite this, Bruce quickly picked himself up and charged about the stage like the true front man he is. Classics featured such as “The Number of the Beast”, “Fear of the Dark”, “Run to the Hills” and “Iron Maiden”. Throughout the set the band kept the 70,000 strong crowds entertained, and highlights included the walking Eddie and Eddie appearing out a giant sized tank. The one factor that hindered the performance was the sound. Due to Doningtons layout, the sound bounced around the outdoor venue and it proved hard to fully appreciate Maidens performance, unless stood right in front of the mixing desk.

Maidens performance was a great close to the festival, and it’s clear to see why Iron Maiden have been invited to headline the famous Donington festival for the forth time. There remains something very special about seeing Maiden at Donington, and hearing Bruce shout “Scream For me Donington”, Classic