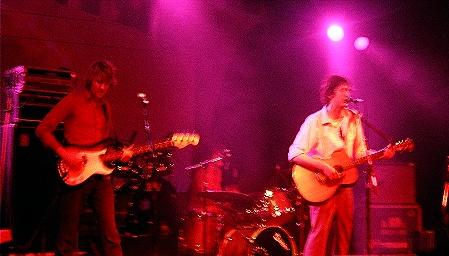 As the on-stage shuffling calms and ‘Lawrence Arabia’ (LA) and his fellow freaky friends take to the stage, one man on an apparently solo mission, stands bold and true, ready to rock with the band whilst the rest of us kick back and enjoy all that is at hand. After the first song alone, I realise I’m a fan! First impressions cast offer echoes of great bands such as ‘The Concretes’(TC), the band they’re currently supporting on tour, ‘Low’, ‘Mazzy Star’ and ‘The Magic Numbers’.

The real beauty here lays in the fact, yes fact, that LA are still in a chrysalis state, waiting for their fully formed selves to become magnificent. A good band for comparison would be ‘The Flaming Lips’ who after spending numerous years aimlessly zooming nowhere in their psychedelic punk fuelled spaceship, eventually blissed out and got their maniacal act together. Thank goodness! LA have got the charisma, sound and songs to do just the same, once they’ve slipped the shackles of self-doubt and perhaps shyness. Whilst Lawrence and his mannerisms are a little too Jarvis Cocker to rest easy with his stylish and sleek counterparts, his lyrics, guitar work and delivery of each is certainly all good.

Standing to his left is a lovely lady wearing a lovely smirk upon her lovely face. Lovely! It’s a smirk she shares with Lawrence’s right hand man too, looking every bit the slouchy bass player! Surely it’s Simon Jones (Verve, Shining) back from the wastelands! Behind the three of them is the bands drummer, patiently beating his way through the set in his appropriately quirky style. And oh boy do they all work well together! If I weren’t so busy absorbing the performance, I’d be up having my own personal shindig.

Anyhoo! As TC watch on from the balcony, the bands only potential weakness is revealed to me. The added dimension from the backing vocals is almost perfect, but too much aahhing. What’s wrong with the odd ooh or yeahhh? Too many aahhs is notably too mundane. Towards the end of the set, the band pick up momentum and volume and have a good old fashioned rock out, aahhing as they do so of course! On the whole, LA should have many spotlit moments ahead of them. Here’s hoping they’re not another ‘La Honda’, a superb band who sadly are, if at all, remembered for their uncharacteristic and upbeat single’27 Women’ which ate its way into our subconscious as it played alongside images of little white sweets and Isaac Hayes wannabes in that years Tic Tac commercial.

New Zealand’s Lawrence Arabia are well worth raiding your piggy bank for if you find yourself ambling along, despairing about the shocking number of indistinguishable and low rate bands out there.