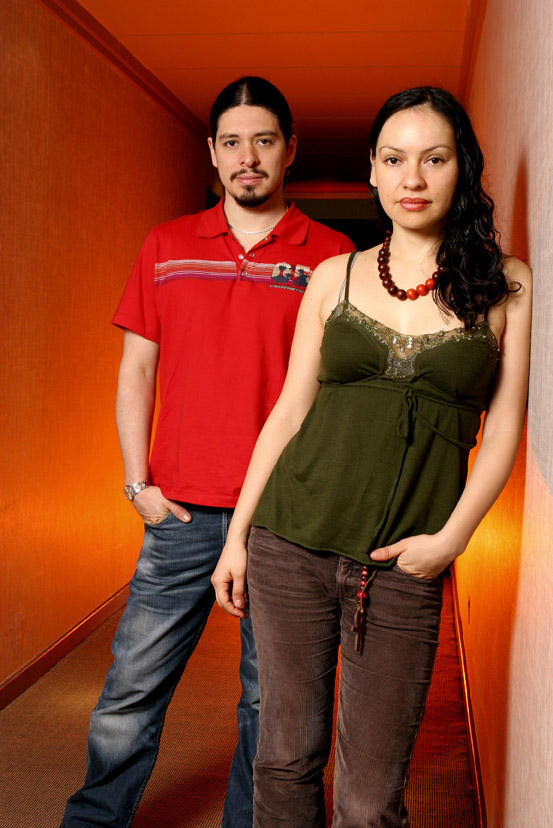 This is Rodrigo Y Gabriela’s forth jaunt in Glasgow and since their King Tut’s days the duo’s reputation has been spreading, gaining them critical acclaim throughout the country.
On the self titled album their music is exceptional. The songs may lack vocals of any kind but that doesn’t take anything away from the records beauty, successfully combining fast paced flamenco style guitars with heavy metal roots to give the pair their entirely unique sound.
Although the Barras lacks the intimacy of King Tut’s, the crowd certainly don’t lack any passion, cheering and screaming at the Latin couple as soon as they set foot on stage.
From the outset we knew the gig was going to differ from the norm and this is confirmed when Rodrigo announces that the band have ditched all conventions, and then invites the crowd to shout and dictate what they want played instead of sticking to a set list.
An overwhelming roar for their cover of Metallica’s ‘Orion’ sees the duo race into the song putting a whole new acoustic perspective on the heavy metal ballad.
With each song their guitar playing gets more astounding, Rodrigo dashes around the fret board at unrivalled speed plucking notes delicately, while Gabriela’s strumming carries the rhythm of the songs perfectly sometimes thumping her guitar making the need for a drummer superfluous.
Rodrigo and Gabriela seem to revel on the dimly lit stage, jeering the crowd to make more noise and engaging in good banter with the audience in between songs. Sometimes even teasing the Glaswegian horde, they play tasters from famous songs such as ‘Seven Nation Army’ and ‘Master of Puppets’.
One of the many highlights was hearing them play Pink Floyd’s classic ‘Wish you Were Here’, encouraging the crowd to sing along in full voice.
Halfway through the pair lock themselves in a sort of guitar duel seemingly trying to best each other using their instruments as weapons. This eventually descends into a short but sweet rendition of ‘Voodoo child’, followed by crowd favourite ‘Diablo Rojo’.
The venue erupts again as the couple play their most famous cover, Led Zeppelin’s ‘Stairway to Heaven’, ending the evening with album opener ‘Tamacun’.
The duo have yet to make an impact in the UK charts however when it comes to live shows, there is rarely anyone who can top the twosome. It’s easy to see why people are calling for them to be dubbed the next ‘guitar heroes’.