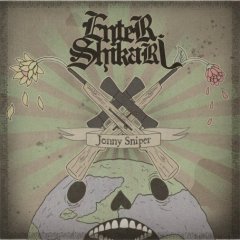 The 3rd single to be taken from their debut album ‘Take to the Skies’ sees the St.Albans Shikari boys upto their usual hardcore trance rock wizardry.

The intro is characteristically kitsch and overall the song sounds like a mash up between Van Halen and Bullet For My Valentine interlaced with impeccably played scales and plenty of old skool riffage thrown in for good measure.

Rou Reynolds infectious and melodic vocals add weight to the tune and the catchy chorus means there’s plenty to sing along with as you’re pulling off your favourite metal stances. As Britain’s currently most successful unsigned band, they appear to be going from strength to strength, widening their already loyal fanbase. If they keep churning out ‘choons’ like this then, in the bands own words – I can’t help but listen….