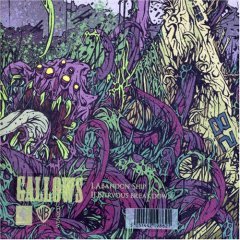 Public Health Warning: This single is not suitable for pregnant women, those of a nervous disposition, or the faint of heart. Or Keane fans.

With all the manic energy of Black Flag and the musical fire of Story of the Year, Gallows are bringing old school punk back into the mainstream, albeit with more musical ability than the Sex Pistols ever had. Avoiding overtly political lyrics in this single, they make it all about the music and the power rather than making a controversial point. In fact, vocalist Frank plays the captain of a ship, screeching out lyrics that are comprised mainly of warnings and cries for help, allowing Lee Barratt’s frenzied yet faultless drumming to take centre stage. Concentrating more on creating a stable beat for the song to stand on, Barratt only shows off his talent sporadically – but when he does, like at the 1.18 point, he would not be out of place drumming with the likes of Alexisonfire.

Seemingly more concerned with creating a great sound than nursing any individual’s ego, Gallows sound like they’re having the time of their lives. Unfortunately, the NME have got wind of them so listen to them now, before the very mention of their name makes you want to vomit due to overexposure, as it will do in a month’s time.