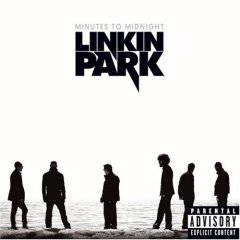 In an attempt to move away from their apparently unwanted ‘nu-metal’ status, nu-metallers Linkin Park have teamed up with legendary ‘proper rock’ producer Rick Rubin for their latest album. And despite a change of image and protestations that they’ve moved away from their old sound, they are, in fact, still the Linkin Park that we know and…well, know.

Perhaps it needs to be pointed out to Chester and his ‘krew’ that a Mohawk and some leather does not a rock band make, because they’re still pouring out the same shit the always have, just in a different outfit. This is most evident on the excruciating ‘Bleed It Out’, and ‘Hands Held High’, which is so terrible that if you squint you can imagine Blazin’ Squad performing it. Yet its not just the odd track – the old school Linkin Park vibe still manages to make itself known on the rest of the album as well. Maybe its because Mr Bennington has such a distinctive voice, or maybe its because you can’t polish a turd, but it would appear that not even the most influential producer can tear these guys away from their long-outdated and frankly laughable style. Don’t get me wrong – the individual elements, such as the guitar parts on ‘What I’ve Done’ are fine by themselves, but for some reason when they’re all put together it just becomes a mess of shite.

If these guys ever want to be taken seriously, they either need to strip their music down to the bare bones and build it up again without all the rubbish rapping, etc, or just sack a few members and start making simpler music. What we have here is a brilliantly produced album filled with pitiful music, and quite frankly, it’s just a waste of time.