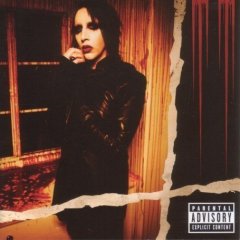 Marilyn Manson – Eat Me, Drink Me

When your career is based on your image, where is the line between enough and too much? Take Marilyn Manson, known primarily for pushing boundaries, being controversial, and being the uber-goth ‘Antichrist’. To lose any of these aspects of his music would make him redundant, but when does the act become trite and tiresome? Well, on first impressions of his new album, the answer seems to be ‘now’.

Even just by looking at the track titles it all seems a bit stale – names like ‘Red Carpet Grave’ and ‘Mutilation Is The Most Sincere Form of Flattery’ seem to be over-the-top for the sake of it rather than to make any real point. The first single ‘Heart Shaped Glasses’ revolves round the line “don’t break my heart and I won’t break your heart-shaped glasses”, which is almost brilliant in its simplicity, but in fact is just a bit shit, much like the rest of the song. Having said this, the rest of the album is better, and though opener ‘If I Was Your Vampire’ sounds terrible, its title belies its brooding, atmospheric style and ability to make you vaguely horny. Manson clearly knows his strengths don’t lie in his vocals, and so cleverly uses his voice to bring out the best parts of the music – which is always solid, due to the plethora of talented musicians with which he surrounds himself.

However, the fact remains that Manson’s shelf-life looks to be coming to an end. On ‘Putting Holes In Happiness’ he sounds more like the late 90s version of Alice Cooper than ever before, and none of the songs on the CD come close to his best works of the ‘Disposable Teens’ era. He’s clinging onto the style that has worked for so many years, but its becoming a bit worn, and a smart guy would either quit music or have a massive turnaround right now. Like Oasis, Manson has reached his peak long ago and can now only hope for a catchy tune now and again, and though there are a couple on this album, its not enough to justify the rest of the substandard songs.