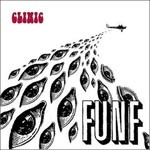 Clinic are a band from Liverpool that have managed thus far to avoid the cliqued associations with the sea shanty town without entirely discarding their roots. In managing to do this, partly by writing and recording alternative music and partly by ignoring the call to be labelled alongside other successes from the Mersey scene, they have garnished the praise of critics and DJs and developed a cult following of music fans across the world.

Their fifth release, Funf, comes out on Domino Records, the South London based label that shares the same philosophies as Clinic, of nurturing lesser mainstream bands with direct influence on mainstream and underground fans alike. Inspirational acts such as Sebadoh, Animal Collective and Four Tet are signed to Domino. The label has its exceptions too, these being Arctic Monkeys and Franz Ferdinand, the million selling artists on Dominol.

Following up on last years release ‘Visitations’, Clinic release these b-sides and previously unreleased songs. Funf itself is a prized collection of folk, punk and space rock. The album opens and closes with effects-laden Ennio Morricone-style Western instrumentals. Through the reverberating guitars there is the melodrama of music scored for film. Sandwiched in between is an emphatic filling of glorious music that requires your listening.

Clinic are a band you can bet won’t be selling out, tuning out or watering down any time soon and Funf proves this without doubt. I hesitate to casually conclude with, “another great album by Clinic,” but…