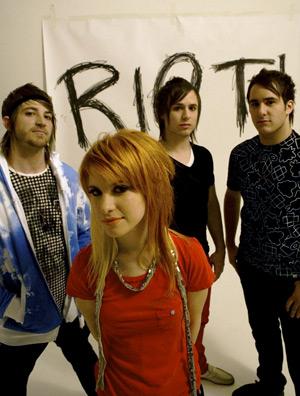 Whatever happened to the bands who go through high school playing gigs at their annual school disco, practicing in the music rooms at lunchtime and handing out tapes of some really bad recording of their catchiest song on the bus ride home?
It seems these days they have been lost in a mist of teenage bands who are actually making great records and even selling out big venues all over the country.
One of these very bands is Paramore. The last time they played in Scotland they sold out the Garage and tonight they return only six months later playing a venue twice that size. Of course, such popularity comes with its dangers. However it doesn’t look like Paramore are in danger of being a one hit wonder and in truth, they look more like becoming one of 2007’s biggest success stories.
Hayley and co burst onto the stage to an expected euphoric retort and start proceedings with ‘Misery Business’, taken from the new album aptly named ‘Riot!’.
Old classics such as ‘Emergency’, ‘All We Know’ and the anthemic ‘Whoa’, all come hand in hand with yet another sing along, provided by the masses of teenagers who have turned up to show support.
As everyone piles out, groups of girls are singing the new lyrics at the top of their voices and as “everybody sing like it’s the last song you will ever sing” echoes through the corridors of the venue, in the moment it may seem Paramore are the only band worth singing about this year.