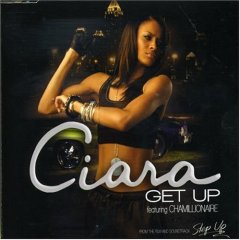 It was around this time, two years ago – when Ciara made her first début via her critically acclaimed album, Goodies. The album has proven to be the driving force behind the artist’s overgrown success, with Missy Elliott and Fat Man Scoop both making appearances on the compilation. Ciara is back with a brand spanking new collection ‘The Evolution’. Currently hitting off of the album and onto the airwaves is Get Up, a single released as the official soundtrack for the movie Step-Up, featuring Charmillionaire.

Get Up is a processed slice of cheesy R&B, mixed with a fusion of hip-hop and pop sounds. The single is very jumpy, fresh and has an electrifying background beat, to get your juices flowing. I can almost imagine the track being rotated on an OC episode, in a partying scene of course, and around both the London pubs and club scenes alike. Overall, Get Up is a perfect execution of pop and R&B flavours, littered with breezy sounds and catchy lyrical hooks. Watch out Madonna, Ciara is next in line for the ‘Queen of pop’ crown and she’s not going down without a fight!