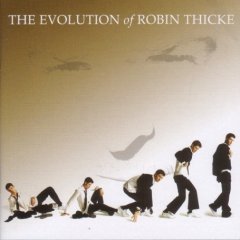 For R&B/soul singer Robin Thicke, the road to stardom has taken many twists and turns, with high-speed chases and a bumpy surface. Today, the Grammy award-winning singer /songwriter is in the driver’s seat. He commands the open road and is headed straight for stardom.

Over the years, his voice and song writing expertise have amazed platinum award winning artists alike, from Mary J. Blige to Michael Jackson and Christina Aguilera. The Evolution of Robin Thicke is the second solo album from the critically acclaimed artist and after much hard grafting, is an enduring work of art. Littered with stories of his past, the album is an all round account of hearth break, redemption, love and temptation. Album opener ‘Got 2 Be Down’ is a soulful track featuring non-other than Faith Evans. Thicke’s voice is truly sensational. His high pitches are well executed and is demonstrated at full strength on this single. Amongst Ms Evans, Pharell Williams and Lil’ Wayne also feature on the album. ‘Shooter’ (ft Lil’ Wayne) is heavy blues inspired, with light tempos and mellow background beats, Lil’ Wayne transfers the single into an all round banger. Of all the 16 tracks, ‘Complicated’ is by far my favourite, thanks to its banging beat, catchy lyrical hooks and high pitch executions.

The album in general, consists of many neutral sounds, which overall makes ‘The Evolution of Robin Thicke’ a pleasurable listening experience.