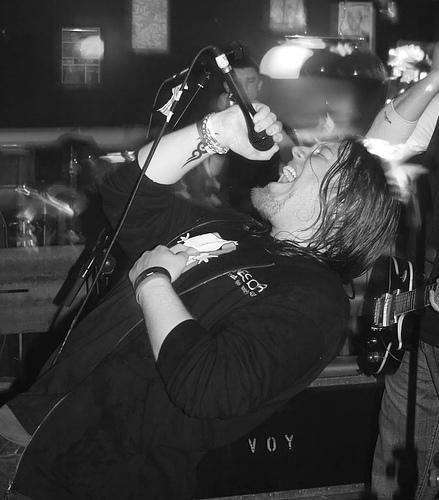 Zuprowski were always going to have a tough time tonight, only fifth teen minutes away Napalm Death are playing the academy and Barney and co’s carpet bombing metal threatens to render the Road kill empty.

Callous raise the question ‘Is it cool to sit at the bar during your set?’ as their singer lounges on a bar stool and periodically makes trips back and forth from stage to bar for the entire set like an avant-garde delivery service.

The answer is of course, no. Only major acts or personalities could get away with this flagrant disinterest with the audience. It’s reflected in the music as for the most part it represents exactly what a group of teenagers attempting metal for the first time would come up with-cliché driven overcooked riffs peppered with mistakes and over exuberance; that’s not to say it’s not without some good riffs and ideas but they are far from conclusion and amount only to a drunken fuck of a performance. Yes it’s loud and heavy and sounds like metal, but eventually dissolves into a mess, highlighted by a mauling of the A-team theme which Mike Post will fortunately never hear.

Zuprowski’s D.N.A will always be tracked back to grunge and early nineties metal, in particular the likes of Alice In Chains and Soundgarden (they cover ‘Outshined tonight.) Their roots, clearly evident throughout their constantly progressing style doesn’t date them, rather it continues what previous bands from the grunge era wanted: Cliché free and thought provoking heavy music. It’s a short set tonight before they leave direct for Prague on a tour around Europe. Tonight provides a mezzanine into what they might be packing.

‘Redeemer’s massive sound seems to shock some of the band members, it’s that heavy, and should remain in the set as it encapsulates almost every facet of Zuprowski Connection’s sound. Aggressive and wide reaching, like a working class Tool or bar room Mastodon.
‘Nada’ similarly supports the ZC structure, tonight helped by Hollowpoint’s singer Andrew Barker.

Zuprowski would do well to keep investigating their sound and stay in the areas they move through all too quickly to further expand their songs. The setlist needs to better showcase what they can do by opening with the harder-edged material and then move into the more experimental sounds, effectively preparing the crowd. This will have already been taken on board as ZC seem very conscious of their developing music, ever keen to sharpen it’s edge.