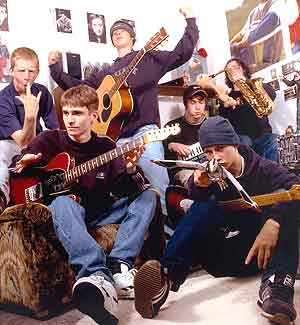 The Coral – Who’s Gonna Find Me

There’s something special about the Liverpool music scene (the obvious example aside). Compared to the slightly over vaunted music explosion in neighbouring Manchester, I’ve always found Liverpudlian bands more focused on melodies than attitude; eloquent statement over Martian dance moves (a la Bez).

Perhaps there were problems shipping acid down the motorway, who knows. But bands in Liverpool toiled and thrived while most of their counterparts along the M62 disappeared up their own arses (The Smiths and Co aside).

The Coral stand as a legacy to that tradition – and their latest single reinforces the fact.

‘Who’s Gonna Find Me’ is a driving riff-led song, with enough Indie sensibility to satisfy even the most mud-caked and jaded of festival goers, while showing a gentler side without risking the flamboyant label.

It’s a fairly apt title for a song which has all the hallmarks of a hit, but isn’t demanding number one status.

It shows how distinctive the Merseybeat sound is. On ‘Who’s Gonna Find Me’ The Coral stand out as original and chart-worthy, but there are distinct echoes of Gary Daly and Eddie Lundon’s China Crisis resounding throughout.

Up the Liver bird (so to speak) – this is a fine, credible and memorable tune.