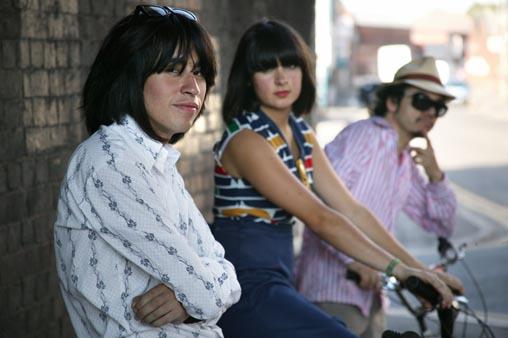 Opening tonight, local band The Makos inform the crowd this is their penultimate gig before going their separate ways. Perhaps the best idea as the bassist and guitarist’s facial expressions for much of the set indicate they don’t seem to have a clue whats going on. Let down by bad sound on the first few songs which eliminates all trace of a bassline, they recover with a instrumental track called ‘Airport’, which for three minutes is a little bit of magic. There is far too much going on for just three of them to produce with the lead guitarist kneeling down for much of the set to make noise with synths. In short, It’s a very messy penultimate gig for The Makos.

Managing to squeeze their set in between The Ripps and ghouls walking past the stage (Neil’s Children were playing downstairs) were Glasgow trio, The Black Alley Screens. Charming the crowd into submission with easy banter, they play a dynamic set perfectly blending old and new into tunes for the noughties that make your bones dance. Highlights of their short set include ‘There is A Truth You Wont Believe’ – a retro soaked belter and ‘Shake Kill Rock ‘n’ Roll’ – which comes with short, sharp bursts of punky guitars. When you think you could peg their songs and figure out what was coming next, they bring an extra flourish that throws you, makes you stamp your feet at being wrong then finally shrug your shoulders after admitting defeat.

With members called Patch and Raul Lagunas and a female drummer who informs you “this is a song about love… actually its not, it’s about wanking”, one really has to love the Ripps from the outset.
The hotly tipped Coventry headliners are an impressive, tightly rehearsed trio who obviously enjoy playing onstage together. Current single ‘Holiday’ has adorable vocal harmonies and is a great summer tune, at times recalling Supergrass. Another song, ‘Vampires’ possesses a wonderfully dirty bassline. However, a few songs into their set comes the dreaded sense of déjà vu as it becomes difficult to distinguish one song from the other. The drums in particular merge into one long thump and despite the pretence of being political punk, there is something very cartoonish about their music. It comes down on the side of Green Day rather than The Clash. Overall Their music is neither challenging nor innovative but is presented with an enthusiasm which forces you to sit up, take note and tap your feet along to the tunes.