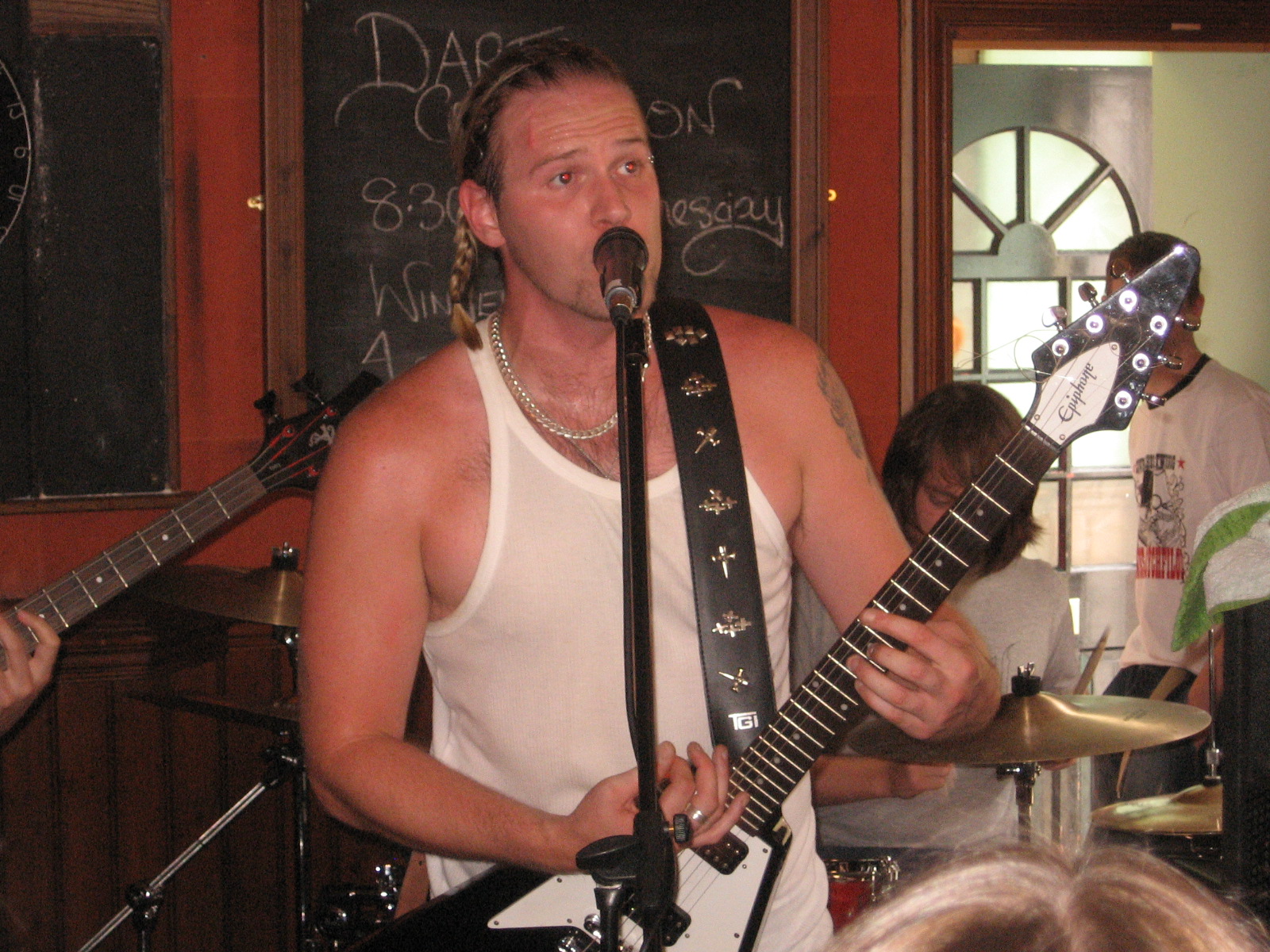 Arriving in Blaenau at 2pm I have just walked over one of Wales’ largest mountains to get here for no apparent reason. The temperature is hot and I have no idea why I’ve been walking through it for the last 5 hours. Blaenau is somewhat like Royston Vasey in that the locals seem very scary and somewhat annoyed that you’ve dared to enter their realm. The Car Gwyllt music festival has already begun and now it the turn of Plant Duw live at the Queens venue smack bang in the middle of town.

Plant Duw play an energetic set driven by their libertines esque guitars coupled with bags of energy. They have recently been in the studio with Dyl Mei recording their debut album and they seem as tight as a miser throughout their set. The crowd respond with warm applause as they play ‘Nerth dy Draed’ and ‘Tren Gelsachindra’. Given the heat they have sadly not got dressed up for the occasion, which is a shame as the boys do have a rather splendid style

Formed from the dust of the Big Leaves brothers Rhodri and Meilir Gwynedd have now found a new voice with Sibrydion. Now on the verge of releasing their second album the band play a mix of new and old tracks. Having been knocking around the welsh music scene for their entire adult lives the brothers now seem to have hit pay dirt with their recent incarnation with fantastic songs performed by musicians who have seen it all already. The sound is quite sublime with favourites such as ‘Violent Light’ and ‘Dafad Du’ enjoyed by all. They have even added a mediaeval track to their repertoire witch would fit in perfectly at the court of King Arthur. The crowd is packed with faces such as Gai Toms, Cowbois Rhos Botwnog and legend Rhys Mwyn in attendance. The only damper is that they played so soon in the day as they are true headline material and would have done a fantastic job later in the day.

Now time for a move as the show shifts up the high street to the Meirion. Aron Elias is playing with his new band Y Rei and as I walk up the street I can hear the opening chords of ‘Hogan Ddrwg’. The venue is even smaller and is so packed the band have only the space they are standing in. Going to see Y Rei is mostly all about front-man Aron Elias who not only is one of Wales’ finest guitar merchants but is also an attention seeker par excellence. He wheels out his double bass for a couple of tracks and breaks some guitar strings going through his Hendrix esque set of axe stylings, but the story of the gig is the last track. The benches around the walls of the pub are filled by middle aged locals who carry an expression of what the hell is this and why is it interfering with my Saturday drinking. To close the set Y Rei play a cover of James Brown’s ‘Get up I feel like Being Sex Machine’ and slowly things begin to change. People who looked appalled recognise the track and start some head nodding. Feet begin to tap with joy as those gathered recall the great man of soul. By the end the venue applaud with joy and the band seek some fresh air outside before they expire from the heat.

The headline act draws ever nearer and DJ’s Llwybr Llaethog leave the stage. The festival has now moved to its final location outside of the rugby club. The ground is made up of loose stones and with the crowd now truly leathered after all day drinking in intense heat your left thinking that any trouble would turn nasty very quickly. The Genod take the stage with certain members appearing somewhat the worse for a lot of free booze. Basically the set is a mess with Dyl Mei almost falling flat on his face at one point before halting one song to call for a cigarette from his mother in the crowd. Mr Phormula had also been indulging in the wicked brew with the calmative effect of reducing his usually excellent performance into a pale shadow of himself. The Genod have much to do to make up ground after this performance with headlining sets at the eisteddfod and Sesiwn Mawr to come.