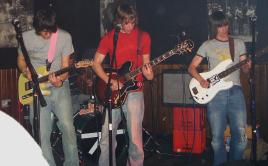 Wigan’s own Mon Ouisch are a ferocious new Indie punk band, they play classic 70’s inspired punk at break neck speed. The scuzzy production gives the band a refreshing edge, you can hear a modern band whose influences span longer than the latest Indie bands from the last 6 months. There are some comparisons to bands like the Arctic Monkeys, but the band definitely shares more in common with the 70’s punk pop of The Buzzcocks mixed with 80’s American hardcore bands and a hint of Northern Charm, rather than the tiresome sounds of the next Kaiser Chiefs knockoff.

EP opener Passions and Reversals starts off with a riff from the Wire/Buzzcocks school of punk guitar which suits the garage punk production like a glove. The vocals are pretty gruff and aggressive which separates them from most Indie bands around at the moment. The main problem with Passions and Reversals is that it is missing the pop hooks which made most of the 70’s punk bands so great – at the moment it is just screeching over ramshackle guitars. There is an occasional spark of something great here but it might take a while to surface.

The Yeah Song is a Libertines style Indie punk song with more of a tune than the EP’s opener. If this melody had a hint less generic ness in the vocals mixed with the ferociousness of the guitars of Passions and Reversals it could give Mon Ouisch the edge that will get people to really stand up and listen.

A Weary Mess is a pure swearathon of a track – although it does sound quite Cribs like, which is understandable considering the fact they are both from Yorkshire, it does contain the bite of the great 80’s Punk of the Bad Brains and the Dead Kennedy’s. With a bit more thought in the lyrics, which didn’t really do much for me, on the EP Mon Ouisch could be coming up with something which could impress fans of Indie, Punk and Metal all at the same time. The last track on the EP is an earlier demo, Us Versus which does show how the band have grown a lot since these early demos, but there is some work to be done. However, I’m sure this won’t be the last you hear of Mon Ouisch.