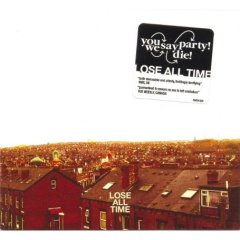 You Say Party! We Say Die! – Lose All Time

Although YSP! WSD! Have been bubbling around the periphery of the music scene for a while, they don’t seem to have broken big but with the emergence of dance punk bands like CSS, this could be their year.

Second album ‘Lose All Time’ is a breathless wild ride from the Canadian five piece. ‘Five Year Plan’ is frantic and bassy and sets the scene for the first half of the album…its full throttle all the way.

None of the tracks disappoint and they give the impression that they would be a frenetic and passionate live act. ‘Teenage Hit Wonder’ gives you time to catch your breath quickly before you are thrust into the shouting chorus of ‘Like I Give A Care’… “SHUT OUT THE WORLD…SHUT OUT THE WORLD…!!!!!”

A softer approach is taken with ‘Giant Hands’ but it doesn’t lessen the impact of the album and both this and ‘You’re Almost There’ show a delicate side, flashing a vantage to the other side of the emotional spectrum. The latter is a beautiful piano driven lament with haunting vocal. Comparisons to the Yeah Yeah Yeahs are inevitable but as a homage more than anything else.

Tempo increases again for the final stretch to finish off what is an album of great tunes.